On your marks, get set…BAKE!

This week, the whistle has been blown as we kicked off the first heat of the Thinking Space Bake-Off, with our judges declaring “On your marks, get set.. BAKE!”

Beginning the contest with a smaller group to ease everyone back into the thoroughly enjoyable routine of eating cake each week, the ‘Thinking Space’ themed competition began with three new entries; amateur bakers who were taking the leap to bake for their colleagues for the first time. And continuing with the string of three, the competition included three new judges, deemed ‘cake connoisseurs’ after their participation and success in the event last year.

Linked to the infamous ice cream van which visits us during summer months, our Friday ice creams were replicated in Amrit’s entry, with vanilla ice-cream-cone-shaped cupcakes topped with white buttercream icing, a flake and a variety of sprinkles and flavoured sauces to look similar to the original 50p soft serves.

Antonio instead chose to stick with a theme that he is personally involved with – the lunchtime table tennis matches. Matches that began with 2 people wanting to do something different with their time now often involve 6 people, as employees use their break to include a little physical activity in their day. Utilising one competition for another, Antonio used this opportunity to create a strawberry cheesecake that was reminiscent of the red ping pong bats that the players are often seen with.

The third participant in the group, Piotr, took inspiration from his male colleagues who like beer. Focussing in particular on the preferences of one specific colleague, ‘Uncle Andy’, he chose to make a Guinness cake. Topped with a chocolatey icing and a beautifully done Thinking Space logo, the pictures added a hint of hilarity as Piotr’s wife posed whilst pretending she had baked it.

After some deliberation by our three judges Tina, Emma and Nigel, the winner was announced…

…the ice cream cone cupcakes made by Amrit!

With our contestants “thinking outside the box” in their attempts, this week’s cakes were impressive in their thought and creativity. So a big well done to everyone who took part and as a result, we raised lots of funds for our chosen charity Jane Scarth House. 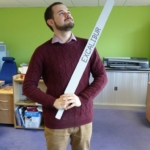 Employee of the Month for March 2017Blog, EOTM