The Competition Hots Up…

As another Tuesday passes, so does another round of the Bake-Off, as the competition hots up and 4 new contestants bring in their homemade cakes. With admirable variety this week, staff were treated to lemon drizzle, dark chocolate gateau and red velvet cakes, plus a fruit-topped Pavlova.

The first of these was Sam’s lemon drizzle cake, which was a lemon and sugar coated white sponge very carefully decorated with pistachio nut dust in the shape of a Kanya aluminium extrusion profile. When questioned, Sam announced inspiration struck in the form of… a cake! With Steve Hooper often bringing in his wife’s infamous Lemon Drizzle cake for our quarterly Sales Meetings, Sam wasn’t just competing with Thinking Space employees, he was up against with Mrs. Hooper too.

The dark chocolate gateau was brought in by James, who made a chocolate sponge filled with chocolate buttercream and coated in a thick dark chocolate icing. Based on the theme of ‘space’ from our company name, James added blue glitter to represent our starry solar system and even went to the trouble of adding dark chocolate ‘truffle planets’, beautifully decorated with white chocolate swirls.

Connor decided upon a red velvet cake, using a recipe handed down to him to ensure it would be a crowd pleaser. Covering the red velvet cake with a layer of white chocolate buttercream icing, Connor then layered over a roll of white royal icing and tested the steadiness of his hand as he decorated the top. Using Jane Scarth House as his motivation, Connor lettered on both the name of the charity and drew the butterfly shape depicted as their logo, before adding the company name at the top.

And last but not least, our fourth entry was by Paul R, whose ‘cake’ was both a family recipe and inspired by is recent trip to Australia last month. Creating a dessert whose origin is still contested but often associated with the country, Paul R offered up a cream-covered Pavlova. Made even better by the strawberries, raspberries and blueberries covering the centre, the desert was a salute to our Australian office and all of its recent progress.

Facing a tough decision, our three judge’s taste-tested and deliberated, trying to convince themselves two winners were allowed to be crowned, before deciding the winner was…

With the stakes rising with each new cake, what will they do next… 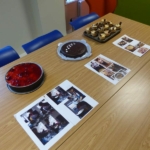 On your marks, get set…BAKE!Blog 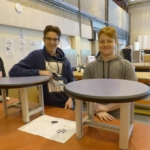