Tuesday has come and gone again, and so have another four delicious cakes. Were they cake, fruit, or fruity cake? It seems this week’s entries had just enough servings of fruit that we could almost consider them a healthy treat… almost.

The entries included fruit topped tarts, a berry loaded Pavlova, a carrot cake… and then the one anomaly – a chocolate cake good enough to tempt even the best of us.

With the pressure to use creative yet Thinking Space-related ideas, Paul decided he would stick to the time-old tradition involving our weekly fruit drop as his theme, preparing two custard filled tarts which were flavoured with fresh strawberries and pears. To add decoration, Paul piped on lettering of ‘TSS Bake Off’ and ‘Jane Scarth House’ in bold colours of yellow and blue, reminding us all that cakes come in many shapes and sizes.

Liz, undeterred by Paul R’s efforts last week, also brought in an Australian-inspired Pavlova, though her knowledge of the cake was due to a friend she made when first waitressing in London many years ago! Using strawberries and raspberries to offset the sweetness of the meringue centre and fresh whipped cream, Liz was extremely proud of her early morning efforts and participation in the event… though it was noted how she tried to bribe the judges, just in case.

Matt was also included in the spontaneous fruit theme, as he baked a carrot cake themed around the ‘thinking’ in Thinking Space. Characteristic of cartoon characters when deep in thought, Matt created a cloud shaped cake as the central masterpiece and then added two cupcakes, portraying the dots leading up to the thought bubble. The carrot cake was enriched by a mascarpone flavoured icing which was adorned with ‘thoughts’ such as Kanya extrusions and in the centre, a light bulb flashing on.

Neil, captain of our Romsey Relay Marathon,  created a cake to increase awareness of the annual charity event next month and remind everyone of its upcoming arrival, whilst also satisfying all those with a sweet tooth. So using our bright green team shirts as his motivation, Neil replicated the vest by shaping out a moist chocolate cake and covering it with lime green icing, before using white lettering to create ‘Novus’ on the front as per the original.

But finally, after lots of taste testing by the judges, a unanimous decision was reached…

And the winner is Matt with his thinking carrot cake!

With three of our finalists now selected, we’ve only got one more heat to go. Keep your eyes peeled for the final heat.. 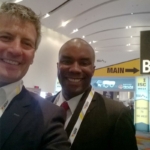 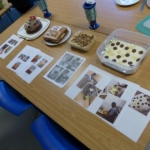 Last but certainly not least….Blog
This website uses cookies to help improve your experience. Find out more