Last but certainly not least….

Last but certainly not least was the eagerly awaited fourth and final heat of the Thinking Space bake-off last Tuesday. The pressure was on as the event would determine the last contestant joining the final taking place in a couple of weeks.

Wanting to out-do his previous creation from 2016, Wayne decided to jump right in by tempting the taste buds of our judges with chocolate, chocolate… and a bit more chocolate. His double-layered chocolate sponge was separated by a creamy chocolate filling and then topped with it too, before being decorated with the Swiss Alps… well, a replica of the Swiss Alps. Using the Swiss triangular shaped chocolate Toblerone to create the mountainous region, he then poured melted white chocolate over the tips to create a snow-peaked effect and added a Swiss flag to complete the picture.

Based upon the same train of thought, Darren also chose a cake based on a country but picked one a little closer to his heart. Originating from, and growing up in, South Africa, Darren used an old South African recipe to create a peppermint fridge cake which surprised us all by not actually involving any baking! Containing double layers of crumbled biscuit and caramel flavoured double cream, the refrigerated cake was sweet and gooey, introducing something new not only to the competition but also to many members of staff.

Patrick decided to use a theme which was both personal and yet universal, football. Now championing the organisation of company’s monthly football games, Patrick has grown the event to become a fortnightly occurrence and include employees from neighbouring companies within the Industrial Estate. So with this theme in mind, plus his avid support of the Southampton FC like many others within the company, the first-time participant created a vanilla sponge encased in white buttercream icing and adorned with miniature chocolate footballs in white and milk chocolate.

The fourth entry was baked by Alastair, inspired by a theme which has caused him ‘endless stress’ over the past few years – our IT questions! Producing an impressive double-tiered Victoria Sponge separated by a thick jam and cream layer, Alastair used icing sugar to creates squares to represent a keyboard before filling them with a lettered out ‘CTRL’, ‘ALT’ and ‘DEL’ in salute his responsibility for our IT requirements. As a joke however, Alastair used his photographs to insinuate that not all computer issues are IT-related, some are user error… yikes, looks like we’d better brush up on our IT skills.

Alastair and his mock-offensive sponge!

Well done Ali, we hope you can think fast, as it is time to come up with a new idea for the final in two weeks time…. 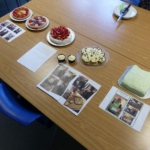 Employee of the Month for April 2017Blog, EOTM
This website uses cookies to help improve your experience. Find out more