Thinking Space were awarded the contract by Chubb Fire & Security and Redworth Associates to modernise the security control room at Manchester Royal Infirmary.

The existing control room was gloomy and dark with outmoded and worn -out wooden control desks. The technical systems were to be upgraded and modernised in keeping with the latest building management and security technologies.

A total re-fit and re-configuration of the room was required to ensure both and effective service to the hospital, and to provide a modern, safe and comfortable working environment for managers and operating staff.

Manchester Royal Infirmary (MRI) was formed in 1752. It had 12 beds and began in a small house in the city centre. In 1908 it moved to its present site on Oxford Road, and was officially opened by King Edward VIII in 1909. Despite world war two bombings, the MRI has continued to grow with rebuilding and new buildings ever since.

It is now a large teaching hospital for Manchester University’s Medical School, and a specialist regional centre for kidney and pancreas transplants, haematology and sickle cell disease. Our Heart Centre is a major provider of cardiac services in the region, specialising in cardiothoracic surgery and cardiology.  The Accident & Emergency Department sees around 145,000 patients each year.

The MRI can boost many medical breakthroughs, the most recent being the first in the UK to carry out urology surgery using a handheld robotic device and fully 3D system.

The MRI, together with Royal Manchester Children’s Hospital are the only hospitals in the region which undertake kidney transplantation and in 2008 the MRI celebrated 4000 transplants over 40 years of service.

The focus for the room is the large built in monitor wall designed by Thinking Space incorporating multiple sized monitors, with equipment storage at a lower level.

To completely modernise the space, Thinking Space installed a suspended ceiling with grid lighting and bespoke down-lighters at the required positions within the room.  A neutral colour scheme and flooring has completed the aesthetic look of the room, its clean lines against the vibrant red worktops.

Thinking Space provided a full project management service, coordinating an established network of contractors to provide a fully compliant control room which will be sustainable 24/7.  The successful planning and understanding of the client’s needs ensured that minimal disruption and timescales was achieved. 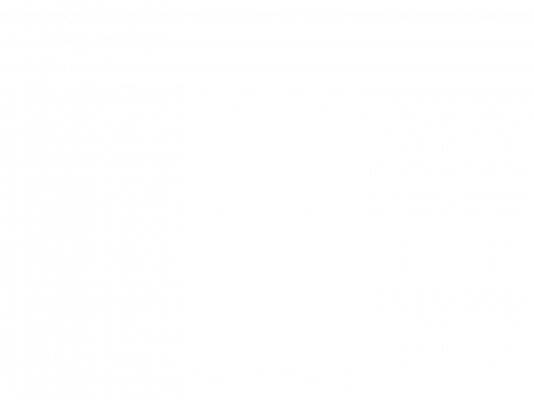 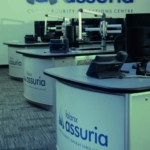 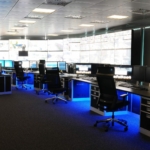